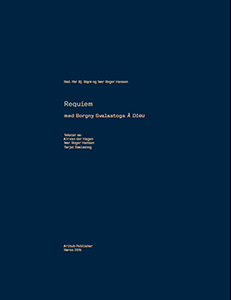 The book was published in conjunction with the exhibition À Dieu – Requiem at Ringve Music Museum (The Museums of South-Trondelag) in spring 2015.

Requiem, which is translated as rest or peace, is the first word in the catholic mass for the dead.

In most contexts, the liturgical actions are associated with commemorations, convictions and emotions. In the requiem mass, it is the relationships and feelings surrounding a  person’s death that are central.

The book presents the theme of the requiem and its tradition in both a cultural and historical setting, and as art. It demonstrates how the tradition of the requiem has been used and is being used in visual art and music.

Borgny Svalastog’s cycle of images À Dieu is both a reference to the liturgical tradition and a startling and moving personal farewell to a loved one. All 30 of Borgny Svalastog’s monotypes in the cycle À Dieu are reproduced in the book in full page images.

Ivar Roger Hansen writes about the history of the requiem as a musikal genre.

In Alf van der Hagen’s text, we meet a sensing and reflecting individual author/narrator who grapples with death against a musical and literary backdrop.

In  Ivar Roger Hansens text about Borgny Svalastog’s art and requiem, we hear the strong voice of an artist relating how music and visual art can be effective in the encounter with people’s death.

Ivar Roger Hansen: From Mass to Monument. The requiem in the history of music